The current recommendation from the American Academy of Pediatrics is no television viewing at all for kids under 2. Zero. Nada. Zilch.

This is a tough subject, and there are lots of opinions here, but don’t follow the crowd just because. Get educated and make up your mind for yourself, as with anything. You’re the parent and you need to do what’s best for you and your family.

Really no tv for kids under 2?

NONE. Don’t get me wrong, there is a time or two in a pinch (you’re on a super important call and you know five minutes of puppies on Netflix will keep them occupied) where I personally think it’s acceptable. That may be once a month or less and I’m ok with that level, five minutes per month.

Their tiny brains are growing exponentially more from zero to two than ANY OTHER TIME IN THEIR LIFE! Don’t fill it with empty junk. If you’re an organic-only, cloth diapering, vinegar-using, sign-language slinging kind of mama (and even if you’re not) you’re filling their lives with the goods, no toxic junk right? So why would you fill their minds, their most important asset, with junk? More on this HERE.

TV is an entertainment tool,  not a life necessity. In our household, we own a TV, but I maybe watch one hour of TV a week, if that. Most weeks, it’s not ever turned on, and hey, I’m surviving life ok! We don’t have cable and never will. I’m mildly intrigued about once every other year for 5 minutes what the Kardashians are doing and then I realize I don’t actually care!! 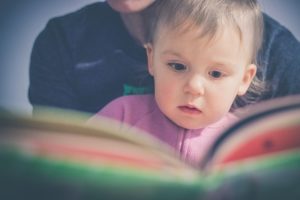 There are lots of studies that show the more advanced the degree, the less TV people watch. Or the more TV one watches, the higher the likelihood of being in debt, depressed/ill, and living in poverty. Also, some showing an inverse correlation in the amount of TV a child watches and the academic and social success they have. There was even a class-action lawsuit in 2009 against Baby Einstein claiming babies and children who watched these programs were, in fact, stalling development and not increasing their brain development as they thought the company was claiming their products would do.

I mean, if you’ve ever watched a baby zero-in and zone out, turn into a complete zombie when you pop on Baby Einstein, just think what their little brain is doing. Now think about when you read to them, and underline the words as you speak them, and point to pictures and engage them, what do you think their brain is doing?  I’ll take the latter.

The issue is less of that the content or speed (although it’s been thought that the unusually fast-paced scenarios of TV do a disservice to the developing brain since they are just trying to learn ‘real-time’ sequences first as babies), but more of what they are missing out on during TV time: reading alone or with an adult, interaction with others, talking, listening, singing, playing and figuring their world out, human touch, outdoor play, the list goes on.

The place your little tikes are at during the day may influence how much TV they watch too. In-home daycare (which at my first glance would mean zero TV, lots of one on one interaction, reading and outdoors) on average ups the amount of TV they are watching vs a center-based daycare program. Curious! More on this HERE.

Our little guy will sit and read by himself for 45 minutes at a time….at 16 months. It gives me just as much freedom and sticking on the boob tube and letting him zone out. He’ll sit with his stack of books and babble to himself. BLISS!

Television will no doubt play a role in their lives, and we won’t deny them!  They have the rest of their lives, after 2, to be inundated by media and entertainment messages. We will not shield them from it, I don’t think that’s wise!! But certainly not unlimited access and unlimited time.

So how do we make the change?

We will increase our level of technology and TV later in life, no doubt about that, so I don’t feel like I am denying him ANYTHING at all by doing this. We are a tech family but work hard to put limits on things so we don’t miss out on the REALNESS of life. 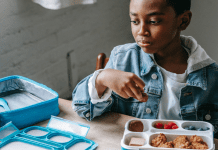 Living the Uncrustable Life in a Bento Box World 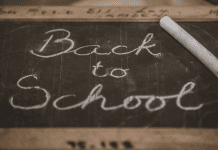 Back to School Essentials {Notes From a Former Teacher} 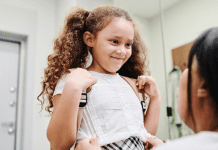