Recently I came to the realization that now that I am a mom, I need to work on how to talk to non-moms!

I’m at a networking thang, sighhhh, trying to stick my neck out and meet new people. So I strike up a conversation with 2 ladies. One whom was late-40’s and corporate and the other one young, fresh-faced go getter.  I asked the corporate woman how she came to be in the role she is today. Her story began with, “well, I have been doing this for only about 5 years, I previously was a stay at home mom to 3 kids.” Lovely – how cool for her!

This statement instantly drove a wedge between the moms and the non-mom in this conversation.

There was now a bond between myself and the corporate mom. I have zero corporate anything in my blood, I probably actually related most to the free-spirited outdoorsy-bike-riding chick. BUT, now that the “mommyhood” was brought up, our secret club was revealed, and there was no turning back. It was just so natural, it rolled off my tongue…question after question about her kids and her journey with them at home and deciding to work again, on and on I went. All the meanwhile, I’m trying to drum up questions to engage the young lady to my right who was standing there, CLEARLY feeling left out of the conversation.

“…I have a cat. Haha” the young woman chimes in. And we all giggle a bit, kindly…but with a tiny bit of sadness that acknowledged that in fact, she was different.

This struck me so hard, because just a year and a half prior I did not have a child. I am so new to this mama gig, I have 1 child, and he isn’t that old. So why do I feel SOOOO distant from this awesome chick who I normally would have befriended?

Well, it usually goes back to MY fears or MY issues and has very little to do with the other person:

I left the event feeling so weird, like I’m now on the other side. I know that’s ridiculous because we are all the same, and we were all once not a mother, and we all don’t hold ANYTHING against those who aren’t mothers.

A few years back, I remember going to friend’s parties and for several years I was the only one in that group that didn’t have children.  It was pretty obvious I was an outsider within my own friends.  And it truthfully sucked, it hurt. I was left out in the conversations, not because I didn’t try to hop in but literally what information could I add besides saying ‘he/she is sooooo cute, omg,’ or ‘wow, that must be hard’ or ‘I can only imagine how crazy that is.’ It certainly created some distance, and I regret holding it against the moms for that. 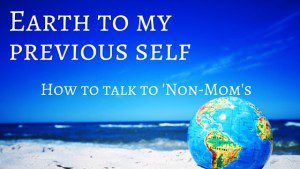 So here are the things I wish I would have done and how I’ll engage non-moms in the future:

I hope these help, I ADORE the non-moms in my own life, and desperately need them and love them more than they know.  I was just so caught off guard in this scenario. And how about a new term for ‘non-moms’ —- how about NORMAL PEOPLE! 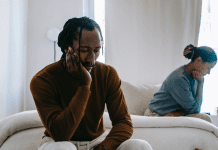 Is It Better to Be Together and Unhappy? 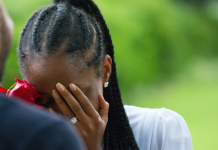 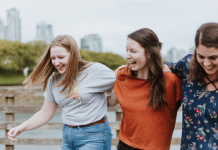 Good Friends Are Hard to Find